Ford’s 2022 F-150 Lightning electric truck is a runaway sales success long before the first one ever reaches a customer. An electric version of the popular F-150 (America’s best-selling vehicle 44 years running), the Lightning is good for up to 300 miles on a charge and can haul up to 2,000 pounds of payload.

Ford sold so many reservations for the truck that it had to double production before reviewers have even had the chance to test the vehicle.

Success like that – brisk sales before a vehicle is even built — upsets the normal sales model of the auto industry. It’s not entirely clear that anyone knows how this works. Early reports suggest some dealers are trying to collect fees and markups that have surprised customers. Now, the Detroit Free Press reports, Ford itself is cracking down on the practice.

Ford Warns its Own Dealers to Stop

In a letter to dealers, Ford Vice President of Sales Andrew Frick wrote, “It has come to our attention that a limited number of dealerships are interacting with customers in a manner that is negatively impacting customer satisfaction and damaging to the Ford Motor Company brand and Dealer Body reputation.”

Buyers follow a two-step process to order the truck. They must first purchase a $100 refundable reservation that earns them the right to order a truck. Ford later sends an invitation to place an order.

Ford sells the reservations directly. Buyers then later place an order online but must designate a local dealership to deliver the vehicle.

In anecdotal reports on enthusiast forums, Lightning reservation holders have reported dealers asking them to pay additional fees to maintain their reservation or be among the first to place an order, as well as charging dealer markups once the customer does place a final order for a Lightning.

“These actions are perceived as threatening customers by withholding their opportunity to convert reservations to orders,” Frick’s letter said. “This behavior is not allowable.”

A Patchwork of State Laws

Relations between automakers and their dealerships are governed by state law. Laws in one state don’t necessarily resemble those of other states. In many cases, Ford has limited ability to prevent its dealers from charging markups. But the company appears to be trying to restrict the practice.

Frick’s letter threatened to redirect orders away from dealerships that engage in questionable practices. Some sales markups, it seems, could result in dealerships losing the right to sell the truck.

That should help. But we don’t expect the issue to go away anytime soon.

Traditionally, automakers have sold cars only through networks of dealerships, which the company doesn’t own. In the early days of the auto industry, working with networks of dealership partners helped spread the risk of an unsuccessful model. It also helped faraway companies take advantage of trusted local business relationships to build loyal fanbases. In many states, laws ban automakers from selling cars without the help of dealerships owned by third parties.

But Tesla has spent nearly two decades reworking the traditional car sales model. The company pursued changes to state laws that allowed it to operate its own dealerships in some states. In others, it opened “galleries” where Tesla employees can demonstrate the cars, but customers must order them directly from Tesla online.

Other electric car startups, like Rivian and Lucid Motors, follow a similar sales model. That may have set an expectation for many buyers – electric cars are something you order from a website, not something you buy from a local dealership.

Ford Moving to Orders, but With a Traditional Dealer Network

Ford has made no secret of its intention to move toward an order-based model. The automaker could save millions by ending its generations-old practice of building a huge stockpile of finished cars to sell before anyone indicates they want one.

It’s not alone. Several automakers have suggested they will keep lower inventories after the COVID-19 pandemic than they did before. Ford rival GM has said it will “never go back” to carrying large inventories.

But Ford has been alone in suggesting it will move to an order-first model.

With its Mustang Mach-E, F-150 Lightning, and Maverick small truck, the move has begun to work. All three vehicles have sold well through orders rather than traditional showroom sales. Ford faces backlogs of orders for all three. But that’s a much better problem than a backlog of unsold cars.

Ford, however, isn’t a startup taking web orders. It has a nationwide network of dealers and an order process that involves working through them. Those dealerships need to profit from sales to stay in business.

Until all sides of the transaction get accustomed to how that process works, it’s going to be messy.

The Best Advice: Get a Price in Writing, Signed 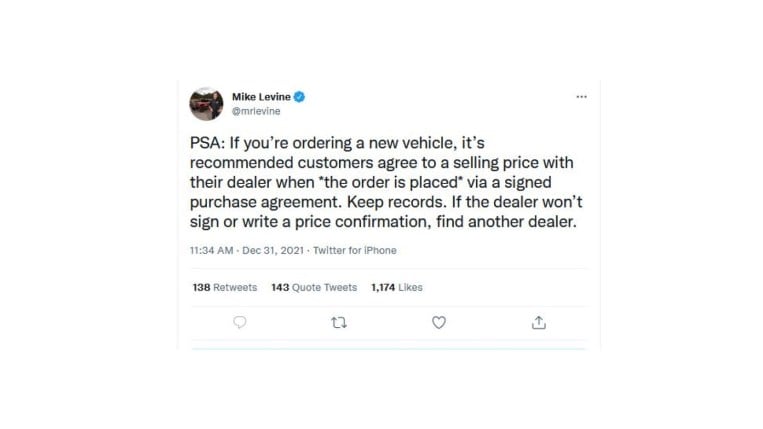 Levine’s advice is solid. Buyers should always obtain a signed purchase agreement to protect them from any later attempts to change the price of a popular vehicle.