Indian Ambassador to Korea Sripriya Ranganathan delivers the opening remarks for the 10th day of the Eurasian Economic and Cultural Forum 2021, hosted by The Korea Herald in Seoul. (Sanjay Kumar/The Korea Herald)

Ranganathan said that India has the sixth-largest economy in the world, and that India’s gross domestic product is returning to pre-pandemic levels.

According to Ranganathan, India is to execute 7,400 infrastructure projects totaling $1.5 trillion by 2026 that offer huge opportunities to foreign investors and engineering, procurement and construction contractors.

She emphasized that Korean firms can bid for contracts and receive favorable terms of credit.

Ranganathan said India has a demographic advantage with 65 percent of Indians in the 15-64 age band, a median age of 26.7 years old and the highest working-age population in the world. 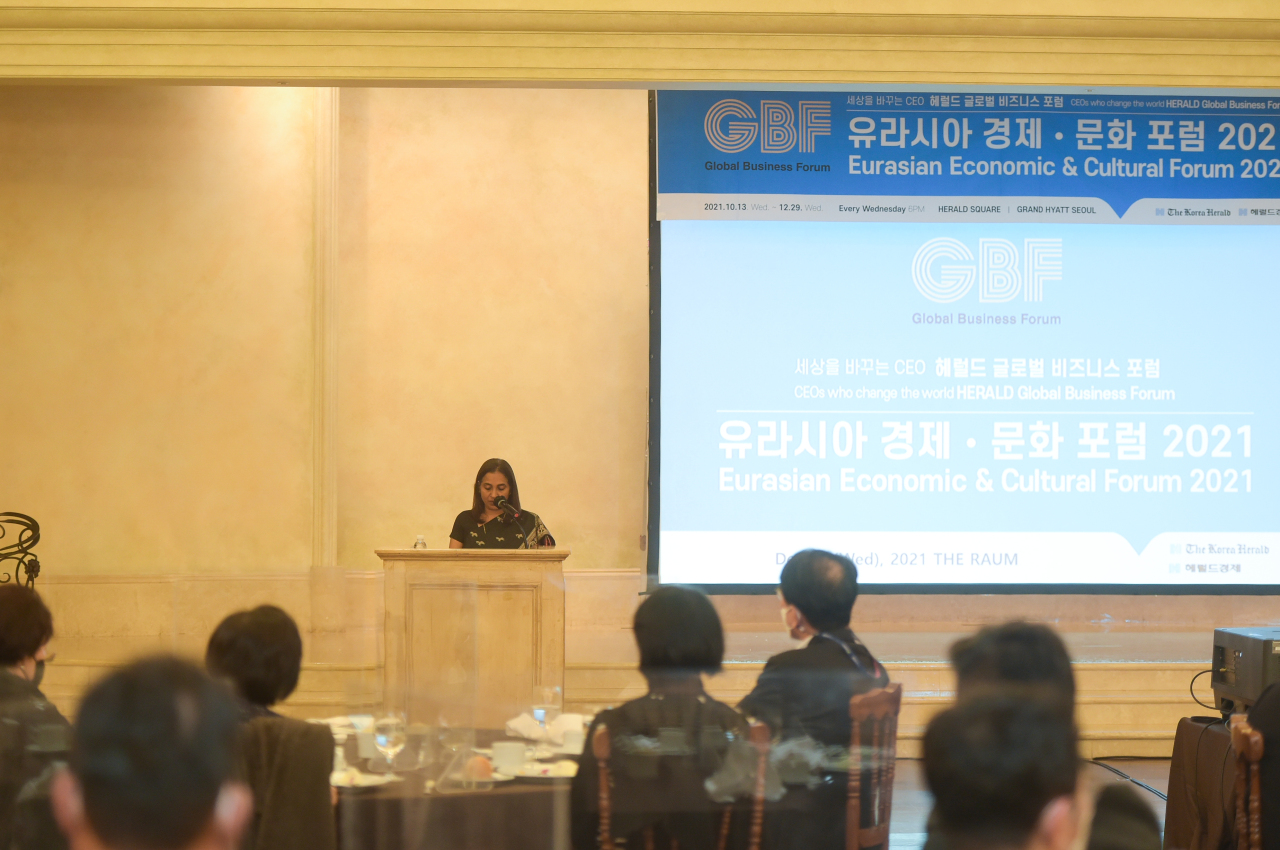 “Korean companies can leverage India’s wealth of skilled professionals and technical manpower with excellent IT and English language skills to enhance their own competitiveness,” Ranganathan said, adding that India has the second highest number of science, technology, engineering, and mathematics graduates, and the third-largest pool of scientists and technicians in the world, which can facilitate Korean companies grappling with the challenge of a shrinking and graying workforce.

Ranganathan suggested diversifying manufacturing and supply base between India and Korea amid COVID-19 and enhancing cooperation in export competitiveness as well as investments in steel, shipbuilding and electronic and digital technologies.

Citing the example of Hyundai Motor, she highlighted the benefits the countries could reap by collaborating. According to the ambassador, 70 percent of Hyundai cars produced in India are sold locally, and the remaining 30 percent are exported to a third market.

The ambassador introduced India’s climate change mitigation commitments on the sidelines of COP26, quoting Indian Prime Minister Narendra Modi’s announcement that India’s non-fossil fuel capacity would be enhanced to 500 gigawatts by 2030, that 450 gigawatts renewable energy capacity would be created by 2030 and carbon net zero neutrality would be achieved by 2070.

She affirmed India and Korea are natural partners that have sealed a special strategic partnership complementing India’s Act East Policy and Korea’s New Southern Policy Plus to support each other’s national objectives.

“Birds build their nests on a windy day so they can withstand strong winds,” the ambassador said, urging India and Korea to partner amid the hard times of COVID-19 and prove their mettle.

What to Consider When Buying a Used Ford Truck

What to Consider When Buying a Used Ford SUV